Marla and Karl in Ludwigshafen

Learning to serve, serving to learn

We both had the privilege and joy of spending time with family this week.  My (Marla) mom and sister Melanie arrived on April 14th just as the warmth we had enjoyed for two weeks disappeared.  Even so our time together was wonderful.  We celebrated the risen Christ together with the folk from Ludwigshafen Mennonite church and, following a long afternoon walk, prepared an Easter dinner. On Monday, Mel and mom took in one of Greg’s German classes along with the other students and then later the same afternoon participated in the sewing circle.  They were also treated to some Syrian food, as one of our students went home at lunch and returned immediately with some deliciously fresh buns filled with a soft cheese and chopped parsley.  It was so nice to be able to share a little piece of our Friedenshaus experience with family who have been supporting us from a distance.  Outside of Wednesday when I took care of my usual Friedenshaus responsibilities I had the opportunity to take a number of “Ausflugs” with Mom and Mel.  We saw many things and walked many kilometers.  On Thursday we benefitted from the kind offer of my German conversation partner, Ute, who drove us to a number of beautiful small out of the way German towns.

Karl’s brother also came for a visit. The two of them had planned a bike trip, starting in Basel, Switzerland and finishing here in Ludwigshafen. They had cooler, windier weather than they had hoped but enjoyed some time together and the scenery along the way. We had arranged to have someone cover one of Karl’s classes while he was away. We’re hoping that this volunteer may be able to participate at Friedenshaus more often after we leave.

Unfortunately, the bike trip meant that Karl was also away for our April Saturday potluck. One of our families was quite disappointed that Karl was away and that we had not been to visit them with our visitors. We had been invited to “come over”, but without a specific invitation, we felt rather unsure of when to do that. Since we had gotten to know each other, they considered us “family” and we are honoured by this. But in their mind, that meant they expected us to visit with our other family. I was properly chastised for my choice not to impose on them. Another good lesson in cultural differences for both of us.

We were around 30 people at this month’s potluck, a little smaller number than in the past.  Because there were fewer people the time we spent together felt a little more relaxed.  At other events I have spent most of my time in the kitchen, making coffee and tea, cleaning dishes etc.  On this day I was able to visit with more people.  It was a bit like family getting together for a reunion.  A couple of men showed up early to set things up.  As people finished their meals a few people collected the dishes, filled the washing machine and cleaned up the remaining food.  It wasn’t “us” (Greg and Marla) putting on a meal for the students.  It was “all of us,” the Friedenshaus family sharing a meal together.  Pretty special. 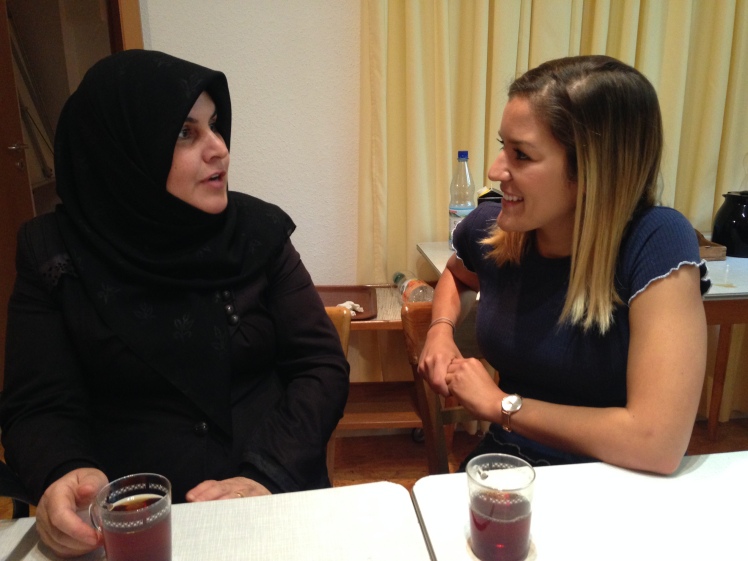 German Word of the Week: die Schranke (the barricade). Okay, not really interesting, but Marla and I noticed this word on a sign a few months ago while cycling on a bike path. Then we asked a friend we were visiting what this was. During this bike trip with my brother, we ran into quite a few “Schranken” as we traveled along the dikes beside the Rhine river. I only knew “Schrank” as a dresser or cupboard, so this word was new to me.

This weekend we are travelling to Regensburg for the German Mennonite Gemeindetag (assembly). Greg, Jen and Alex will be joining us for our big road trip. We’re looking forward to seeing how the Germans do their national meetings.

One thought on “Family Time”